The weather in the Charentes

and on the French Atlantic coast

Discover other parts: ► ► ► the Regions of France 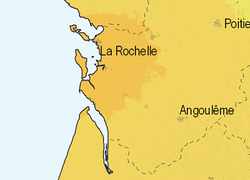 The Vendée - Charentes - Aquitaine area of France is reputed as one of the sunniest parts of France; and within this area, it is the Charentes Maritime department that benefits from the highest number of annual hours of sunshine. The capital city of the Charente Maritime, La Rochelle, enjoys about 2250 hours of sunshine a year (see sunshine map right), a level that is only exceeded in France by the Mediterranean coastal strip. To put things in perspective, the sunniest places in France, such as Aix en Provence, have around 2800 hours of sunshine per year, and Paris has about 1650 hours - exact figures varying according to the data source used.

The area benefits from mild winters and relatively warm summers. However, as with most coastal areas, temperature fluctuations get greater as one moves inland. Along the coastal strip, frosts are rare and mild in winter - on average only 23 nights per year in La Rochelle - but further inland, particularly getting into the interior of the Charente department, freezing nights are much more common, with an average of 44 frosty nights per year in the north of the Charente department. Snowfalls can occur even on the coast, though snow that settles is a rare event in the Charente Maritime.

Thanks to the mild climate, many tropical plants grow luxuriantly in gardens and parks on the west coast.
Thanks to the proximity of the Atlantic ocean, spring usually comes early to the Charentes, and trees and the first flowers tend to burst into life in March, well before most other areas of France. But much depends on the direction of the prevailing winds, and if the late winter period is characterised by a long periods of northerly or northeasterly winds, then the climate of the Charentes, like that of central southern France, can remain continental. This was part of the story in 2010, when north-easterly winds brought very cold air and snowy conditions  down to most of southern France until mid March.  The weather in winter 2010 was also characterised by another phenomenon, Hurricane Xynthia, which. lashed into the Charentes on March 1st, wreaking havoc along the coastline, and flooding some coastal developments in upto 2.5 metres of water. Winter storms are relatively common in this part of France, bearing in mind that the sea off the Charente coast is actually the Bay of Biscay. Winds of over 60 kph are recorded on average 40 times per year on the Charentes coast.

Pavement cafés do good business for much of the year in this sunny region
It is in the Summer and Autumn that the climate in the Charentes is most attractive. Thanks to regular but usually gentle onshore breezes, beaches along the Atlantic coast do not suffer from the oppressive heat that can send holidaymakers in search of shade in the middle of the day along the Mediterranean coastline; and the breezes, tides and waves make for a more interesting seaside experience than the Med. Yet it is in summer that the coastal strip is a particularly sunny area. The land behind the coast being very flat and largely un-wooded, clouds do not start to build up until further inland.
However, ten to twenty kilometres inland, summer storms are a common feature, and can brew up relatively quickly. The area is also known as the part of France most prone to tornados; and though they are rare, small tornados also occur from time to time - on an average once a year in recent years.  That being said, summers in this area are generally dry, sometimes very dry, the occasional storms providing just short sharp periods of heavy rain. Average daily temperatures in the Charente department are in the  twenties from June to September, with average daily maxima peaking at under 30° anywhere in the area. This does not mean, of course, that daily temperatures cannot go above 30° in this part of France; they do so regularly, notably inland. For example in Cognac in 2001, annual maximum and minimum temperatures recorded were -10°C and +36.4°C - which is pretty much average for inland parts of the area.

Gitelink does not collect personal data. We use cookies only to enable anonymous audience stats and some essential page funcitons. To remove this notice, please click  or else request more information